I recently had a very interesting conversation with a customer of Yoink, Bogdan V. He wanted to make Yoink detect screenshots he created so they would show up in Yoink’s window.

Automator to the Rescue

I had the idea of using Automatorto create the screenshot and send it to Yoink. After experimenting around a little bit, I sent Bogdan a very rudimentary workflow (that could, if saved as an OS X Service, also be launched with a keyboard shortcut) and he immediately turned it into something awesome.

This is the script of the workflow Bogdan came up with: 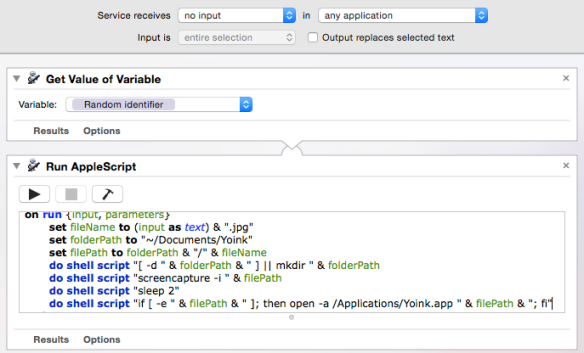 Setting up the Service

You have now successfully installed the Service to capture screenshots to Yoink. What you can do now is create a keyboard shortcut for it so you can more easily access this

That’s all there is to it. Now you can create screenshots that are then immediately available in Yoink for you to drag around.
If you find it useful, be sure to let me know on twitter (@eternalstorms) or by eMail – I’d appreciate the feedback!
Take care!

I got a bit of feedback on this – especially feedback from Pietro S. and Jeremy M. pushed me to update this post with a bit more information.

A ‘thank you’ goes to Jeremy and Pietro for the updated workflows.